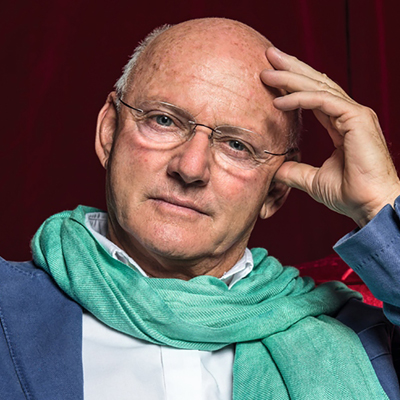 It all began in the circus, including painting. Rolf Knie was in contact with artists from an early age who introduced him to painting. Hans Falk, for example, who accompanied the circus for several years at the end of the 1970s and documented life on the tours, taught him the basics of drawing and watercolor. Knie’s early childhood drawings already bear witness to the exuberant imagination of a young person who is surrounded and stimulated by a thousand magical things. “When I was bored at school, I made sketches which I then finished at home. It made me uncomfortable when I was more interested in my sketches than in the subject matter the teacher was trying to teach me.”

Rolf Knie finds his motifs in front of the stairs of the circus wagons or in the stables of horses and the cages of lions and leopards. He observes and portrays clowns and acrobats shortly before their performance. Rolf Knie is also fascinated by the technical details of ropes, trapezoids and spotlights or artist equipment. “My focus wandered across the entire circus area. I painted him inside and out, at all times. Whether cold or warm, sunny or windy, my pictures were created depending on the environment and mood.”

In 1980 Rolf Knie sold his first picture at his solo exhibition at St. James’ Fine Art Cabinet in Zurich for CHF 600. The watercolor from 1977 shows a fleeting, almost lonely snapshot far from the hustle and bustle of the ring. Circus Knie is a guest in front of the “Neue Züricher Zeitung” publishing house. Here and there a couple of tents, enclosures for the animals, there also the accommodations for the artists and acrobats. The scene appears idyllic, at times calm and abandoned. A quiet, melancholy impression; also executed with remarkable painterly precision. Almost documentary and illustrative. On the one hand, the reduction, on the other hand, the focus on the essentials. One may get a faint impression of the mood when the curtain falls. Eight years later, Rolf Knie bought the picture back at auction – at a price of 6000 CHF. “It’s like your first girlfriend – you never forget her. One wants to preserve this.”

For more information about the artist, visit www.rolfknie.ch